This was a special occasion for me. Although I’m probably not an as big Metallica fan as many other people (ja, I’m a Megadeth guy…), I feel quite thrilled to have had the opportunity to be in the pit the second time the band visited South Africa. I’d seen them at the Coke Fest at the old Green Point Stadium in 2006, but didn’t have the opportunity to photograph them then.

By 2013, it seemed that the band had gone through most of their post-Pop Star break-through turmoil, and had become more of an all-conquering roadshow than masters of Thrash. The overwhelming commercial success of Metallica (The Black Album) from 1991 had thrown the band into a creative vacuum, and they hadn’t produced a musically significant follow-up to the 1988 release, …And Justice For All. That’s a long time.

I wasn’t sure what to expect, but it didn’t really matter. When an opportunity like this arises - you take it, and thanks to my friend Aidan, it did!

So off I went – excited as the squirrels in my friend Caryn’s garden anticipating someone throwing some nuts in their direction. During my walk from my parking spot to the media entrance half-way up the hill, I phoned another friend, Hougaard, to briefly share my excitement, and the moment. Hougaard had spent much time introducing me to Heavy Metal during the later part of the Eighties. Then I found and waited in the queue.

Eventually Bonj came to fetch the media contingent, and we where marched across the sports field and up the stairs of the outside spectator stand and into the building where we waited for further instruction form Wendy of Universal Music.

Van Coke Cartel opened with a slightly tuned, but as usual – highly energetic set. Then we waited and waited some more.

Metallica was as tight as the racing line through the corkscrew at Laguna Seca. But I had three songs to get some work done. I’d done a little reading about some high profile photographers’ experiences and advice on photographing Metallica – just to be as prepared as I could possibly be. This was the last time I made that mistake. I adapt much quicker when I follow my own knowledge and processes. Despite the bad advice, and all the excitement, I think I managed quite well.

Although James seems to be looking out to nowhere, I like how their hands are just about in sync in this photograph.

Here are Kirk Hammett, Robert Trujillo and James Hetfield of Metallica at the Bellville Velodrome, Cape Town in 2013: 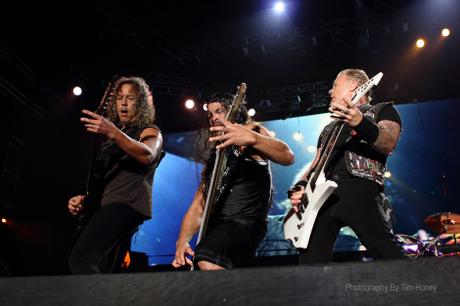 Being ushered quickly out of the pit by some rather large, couldn’t-care-less-about-you-looking security staff after our time was up, no-one seemed to know what we were permitted to do next. I didn’t want to over-stay my welcome, so made my way to an exit to take out my ear-plugs and linger in the sound from a safer distance. I found an entrance and watched some more of the show over the sea of metal heads – still basking for a while in having been thrown a handful of nuts.

As I started walking back to my Kombi a group of about five dodgy looking people started following me – stopping in their tracks as I turned back to stay within earshot of a group of burly security guards. The dodgy guys just loitered, so I made my way to the biggest of the guards and asked him to escort me back to my parking spot.

It was a good night.